Migrating to the Cloud: The Domino’s Experience - So far – Cloud Expo 2013

Colin Rees, Domino's, presenting on Migrating to the Cloud

Colin first spoke about the pressures that the IT faces at Domino’s, from finance and the business, in respect of their aspirations for expansion and continued success.  Domino’s IT department needs to be able to support this, and have performed exceptionally well over the last few years.  Domino’s has seen massive growth in the UK, indeed their revenue has increased over 4-fold over the last 5 years, and is currently expanding into continental Europe.

As well as developing and supporting the main Domino’s website, with the rise in use of mobile devices, mobile applications have also been developed and are currently supported, currently for iPhone/iPad, Android and Windows Phone.  These devices now account for 20% of all e-commerce sales, and it is therefore vital to ensure that these increasingly important applications deliver a good service to Domino’s customers.

Domino’s are currently in the position that much of their infrastructure is on a private cloud, though their test and development environment is hosted on a public cloud, so they are very much in the early stages of their usage of the cloud, and, as Danny explained in the presentation, Capacitas have been helping Domino’s with a number of aspects relating to this. 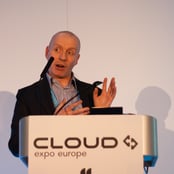 Danny showed that Domino’s peak hour sales can be up to five times greater than the average sales that pass through the e-commerce systems, and Capacitas have assisted in scaling the capacity of the systems, both for these extremes of daily sales, along with the underlying growth that Domino’s is currently experiencing.

Danny demonstrated some statistical methods that enable Capacitas to model Domino’s systems, such as by taking the forecast number of stores which are released by Domino’s, and then turning that into service level demand and at a lower level, component demand.